Gengetone trash! Some parents may faint after watching this latest music video from spoilt Kenyan youths, this is pure madness (WATCH)

0 Entertainment News, Gossip and Drama, Videos 06:41
A+ A-
Print Email 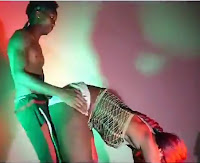 Monday, January 13, 2020 - Trash music that has been christened GengeTone has taken over the airwaves, causing uproar amongst the older generation led by self-declared moral police Ezekiel Mutua.

The explicit Gengetone music that paints women as sex objects and promotes immorality started as a joke when the infamous Ethic Group released the viral Lamba Lolo song but the wave now seems unstoppable.

The young spoilt kids who are releasing the trash Gengetone music have started crossing the red-line.
The videos they are releasing and posting on social media as they desperately chase cheap fame are just sickening.

We came across this latest GengeTone music video that will make some parents collapse.