Foreign Affairs CAS, ABABU NAMWAMBA, courts trouble as he also dares UHURU after the sacking of KIUNJURI - Vows to stick and support RUTO’s 2022 Presidential bid no mater what 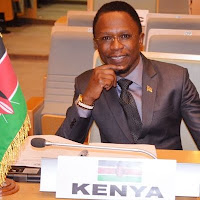 In a video that has surfaced after the sacking of Mwangi Kiunjuri, Namwamba disclosed that the DP made a personal trip to his office to persuade him.

Namwamba made this declaration while explaining why he fiercely supports Ruto.

The former Budalangi MP was in his law firm office when Ruto knocked on his door, a knock that would change his fortunes forever.

"We have started a journey where we feel that we need to have just one leader."

“He is the one who witnessed my debut into politics and he did not look for me anywhere else but he walked into my office," recalled Namwamba.

"I was a very young man, practicing my law and he walked into my office."

"He talked to me and my political journey started," he continued.

He went on to shower praises on Ruto, claiming that the DP was a strong and honest man fit to lead the country as President.

"I know he works very hard."

"You know, if you are a child of a poor man and you get wealth, people claim you have stolen.”

“Some look at my home in Budalangi and think that I stole all that wealth."

"So why have other politicians like Sonko (Mike Mbuvi, Nairobi Governor) been arrested and I have not?" posed the official.

He also warned politicians opposed to the DP to be careful because Ruto had cemented his place as President Uhuru Kenyatta's heir apparent.