Fireworks as MIGUNA MIGUNA does it again! See what he has done that will make UHURU and MATIANG’I regret issuing a red alert against him 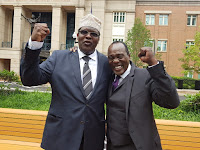 In his Tuesday tweet, the self- proclaimed National Resistance Movement (NRM) General revealed that he has given a go-ahead to his lawyers to file a case against the two, who according to him issued illegal red alerts which bar him from flying to Kenya.
''I've instructed my lawyers to file contempt proceedings against Despot Uhuru Kenyatta's agents like @FredMatiangi and Kihara Kariuki who issued the illegal read alerts.”

“They must be punished and forced to withdraw them.”

“I want to join Kenyans in arresting the despots and conmen,'' tweeted Miguna Miguna.

Miguna, who was set to land in the country early January, was denied access to Nairobi bound flights where he accused President Uhuru Kenyatta and Raila Odinga as the two men behind the red alerts.

Miguna was deported to Canada after taking part in the controversial mock swearing-in of ODM leader, Raila Odinga, following the disputed 2017 presidential elections.