Dr WILLIAM RUTO tells UHURU to reveal whether he will cling onto power after 2022 and stop using busy bodies likes of MURATHE, WAIGURU and ATWOLI – Be a man Mr President!! 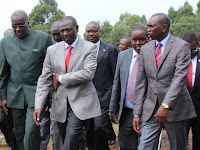 Sunday January 5, 2020 - Deputy President William Ruto has indirectly asked President Uhuru Kenyatta to state whether he is interested in power after 2022.

Last weekend, Uhuru’s drinking buddy and former Gatanga MP, David Murathe, revealed that Uhuru will remain in power, but in a different capacity, after the expiry of his presidential term in 2022.

“Nothing stops the President, as the leader of Jubilee, to head the Government as the Executive Prime Minister as long as the party remains the largest in Kenya,” Murathe stated.
Following Murathe’s remarks, Ruto’s ally and Kapseret MP, Oscar Sudi, asked the President to confirm whether he is interested in the Prime Minister’s position after he retires in 2022.

“I wish the President comes out and speaks for himself on this issue of clinging to power because we know the people purporting to speak for him have not even been talking directly with the President in recent days,” Mr Sudi said.

He also urged Uhuru to address the weakening economy and asked Kenyans to pray for the President to get himself out of what he described as capture by political brokers.