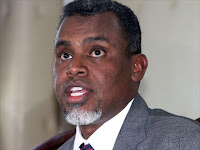 Wednesday January 29, 2020 – The Director of Public Prosecutions (DPP), Noordin Haji, has written to the Judicial Service Commission (JSC) expressing his frustration over a ruling a ruling made by Milimani Chief Magistrate, Francis Andayi, on Monday where he released Embakasi East MP, Babu Owino, on a Sh 10 million cash bail.

Addressing a Press Conference on Wednesday, Haji expressed his displeasure on how the legislator’s ruling was made saying he was shocked to hear the Judge tell a suspect to pay bail on installments.

“We are going for a revision, we have agreed as DPP, and we have also written to the JSC to complain, because that ruling… I mean, I cannot fathom it,” Haji said.

“I have never heard, first of all, of bail terms that you are asked to pay in installments, and then secondly, my understanding is that once you pay bail, it goes to the ex-checker.”

“So how will we be able to access the money to go and pay for the injured party,” Haji asked.

According to the DCI, Babu Owino was arrested on Friday, January 17th, 2020, in connection with a shooting incident at B Club in Kilimani, Nairobi.