Did RICHARD, the man who jumped to his death from 7th floor lose Ksh 15 million in a casino? His mother reveals the TRUTH! (LOOK) 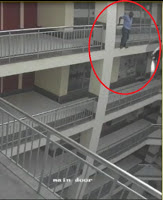 Wednesday, January 8, 2020 - The mother of Richard Wangai, the man who committed suicide by jumping from the 7th floor of Adlife Plaza on Monday, January 6, has rubbished reports that her son took his own life after losing Ksh 15 million in a casino.

According to a report filed at the Kilimani Police Station, the deceased’s mother, a native of Kirinyaga County, said her son “had never even seen or handled Ksh 1 million”.

She said her son looked after her farm in Kwale, and that he was in Nairobi to visit family and friends for the End of Year festivities.

At the same time, the Casino at Adlife Plaza has denied that Wangai was their client.
“We are wondering why a section of the media have erroneously reported that the deceased committed suicide after he lost Sh15 million in a bet with us,” Stephen Makari, Topstar Casino’s head of security said.

“This man according to the CCTV footage walked into the building on foot,” Makari added.

“We don’t know the deceased. He wasn’t our client, this is meant to tarnish our name.”

“Going by what we saw on CCTV, the man is seen walking around the fourth floor. There is no Casino on the fourth, but the fifth floor,” Ogara said.

“We confirmed from the CCTV that he jumped. There is no foul play in his death. He didn’t talk to anybody, the Casino’s narrative is people’s making.”

According to CCTV footage, the 40-year old Wangai is seen hanging on the building’s stairs in deep thought.

He attempts to jump several times and retracts before finally plunging to his death.