Did RAILA lie to Kenyans about his net worth? MIGUNA now reveals RAILA’s real net worth and Kenyans are shocked - 2 billion that he claimed he is worth is just pocket change 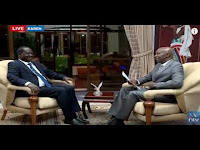 Speaking yesterday, Miguna claimed that the former Prime Minister is a wealthy politician whose net worth is almost quarter a trillion.

According to Miguna, Raila owns multi-billion properties and cited his palatial home in Riat Hills in Kisumu County which he estimated to be worth more than one and a half billion.

In an interview aired live on NTV on Sunday night, Raila said that the Odinga family's net worth is Sh2 billion which is in form of property and company shares.

"I am just about Sh2 billion which we own collectively as the Odinga family,” he said.

Noting his Karen home is worth Sh300 million, the former Prime Minister further dismissed claims that they inherited massive wealth from their father, Jaramogi Oginga Odinga, who was Kenya's first Vice President.

“There is nothing we inherited from him as his children.”

“It must be remembered that throughout his life that he was in Government for only two and a half years,” Raila said.