Crisis in Judiciary as Supreme Court judge, JACKTON OJWANG, quits - MARAGA will have it rough in 2020 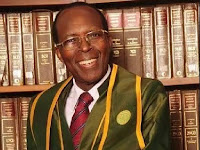 Friday January 3, 2020 - The apparent staffing woes facing the Judiciary spilled over to 2020 with Supreme Court Judge, Jackton Boma Ojwang, set to proceed to his terminal leave on Sunday, January 5th, prior to his impending retirement in February.

According to reports, the retirement will leave Chief Justice David Maraga with more troubles to handle as the highest court in the land will be left with only five judges.

Justice Ojwang will be proceeding to his retirement from the Supreme Court after his attainment of the stipulated age of 70 years.
The retirement means that the Supreme Court will be operating on a bare minimum of five judges including Chief Justice David Maraga, Mohamed Ibrahim, Njoki Ndung’u, Smokin Wanjala and Justice Isaac Lenaola.

Deputy Chief Justice Philomena Mwilu cannot sit at the Supreme Court due to a court case filed against her by the Director of Public Prosecution.

A staffing crisis still exists at the Court of Appeal as three judges retired from service in 2019.

The appeals court was further faced by a major blow after the death of Justice Otieno Odek on December 16, 2019.