Busted! See who bumped into RUTO at Khartoum Airport even as he was trying to avoid UHURU’s Govt - The DP had sneaked to Sudan without informing anyone 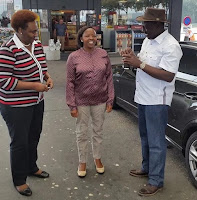 This is after sneaking out of the country to Sudan for a private mission in which he didn’t inform President Uhuru Kenyatta’s Government.

Kenya's Ambassador to Sudan, Arown Suge’ confirmed the DP's visit to the nation and revealed that Ruto informed the embassy as is usually the case.

"We do not know the details about his visit since it was private.”

“He neither visited the embassy nor notified it," Suge stated.

Speaking on the matter, Kalonzo said that both he and Ruto were marooned at the airport over the tense security situation in Sudan.
"I was on my official mission as the Special Envoy in South Sudan and we just bumped into one other with the DP at Khartoum Airport.”

“There was no meeting at all.”

“It is a desperate attempt to say the meeting was pre-planned.”

“The DP was in the company of Kapseret MP, Oscar Sudi.”