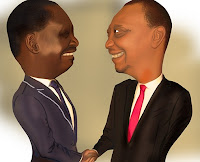 Monday January 13, 2020 - The Registrar of Political Parties has rejected all the applications for the handshake-related parties due to lack of creativity and duplication of names.

Politicians have been trying to register the Building Bridges Initiative (BBI) and the March 9 handshake between President Uhuru Kenyatta and opposition leader, Raila Odinga, as political parties for 2022.

Sources intimate that several applications have been made through proxies in the past couple of months to reserve these two names.

According to Acting Registrar of Political Parties, Ann Nderitu, politicians have been using lawyers and private individuals to reserve the names pending registration ahead of the next General Election.

“Starting with the handshake, we have received eight applications by individuals and advocates acting on behalf of various clients.”

“Recently, a few others started bringing on board the 'Building Bridges Initiative',” said Ms Nderitu.
She said some of the proposed names in the applications included BBI Democratic Party and BBI Party, among others, but she has rejected the names.

“We have not accepted the names because when you register a party, it should be uniquely identified from other entities or other parties to avoid confusion," she said.

Nderitu said her decision to reject the names was informed by the fact that both the handshake and the BBI are names already in public discourse.

“When you talk of the handshake, it is a symbol of a public debate that is ongoing.”

“It will cause confusion.”

“So we are careful not to register it.”

“Again, when you talk about the BBI, there is already a discourse about it with some people supporting and others opposing."

“We want to ask Kenyans to be creative.”

“If you just take a running slogan and bring it here, we will not take it,” she added.