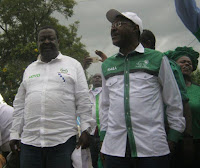 According to sources, the duo that was to lead a parallel meeting in Mumias which is sponsored by Deputy President William Ruto, changed their mind after police outlawed the Mumias event.

The Mumias rally was being organized by among others former Kakamega Senator, Boni Khalwale.
On the other hand, the Bukhungu rally will be graced by none other than President Uhuru Kenyatta and ODM leader, Raila Odinga.

Khalwale had earlier affirmed that the Mumias meeting would go on unopposed, stating that he had mobilised local leaders from Trans Nzoia, Bungoma, Kakamega Counties and Vihiga Counties.

This comes even as DP William Ruto accused the Orange Democratic Movement (ODM) of taking over the Building Bridges Initiative (BBI) process as part of their plan for the 2022 General Elections.