BABU OWINO‘s lawyer, CLIFF OMBETA, says the ODM MP is human because he took his would-be assassin to hospital and paid his bills 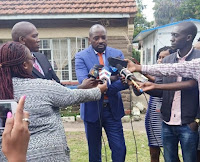 Friday, January 17, 2020 - Cliff Ombeta, the lawyer of Embakasi East MP, Babu Owino, has dismissed claims that his client was attempting to kill Felix Orinda aka DJ evolve when a shootout happened at B Club on Friday morning.

Addressing journalists outside Kilimani Police Station where the MP is held, Ombeta said that his client acted in self-defense because he reported an attempted assassination at the Parliament Police Station in 2019.

Ombeta also said that after the shooting incident, his client took the victim to a hospital and paid the medical bills.
“He is the one who held the man and took him to the hospital.”

“He is the one who has paid for all his medical bills and admission cost,” said Ombeta.

When asked about what exactly transpired in the popular club, the renowned criminal lawyer declined to comment.

He stated that by doing so, he will be interfering with investigations despite knowing what happened.