BABU OWINO‘s attempts to gag DPP NOORDIN HAJI suffers a major blow - This clown will be jailed for many years, his wife should start forgetting him 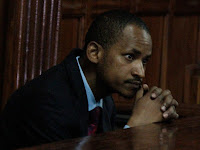 Senior principal Magistrate, Kennedy Cheruiyot, however, certified the application as urgent and directed Babu to serve the DPP with the suit papers.

Inter-parties hearing will be on February 6th.

In the application filed before the court on Thursday, Babu through his lawyer, Cliff Ombeta, claimed that Haji has become an inciter of the public in total disregard to his rights.

“The first respondent’s (Haji) action amounts to public persecution of the applicant instead of the constitutional mandate of prosecution,” Owino said.

The lawmaker was charged on January 20th with the attempted murder of Felix Odhiambo alias DJ Evolve at B Club on January 17th.

He was also charged with behaving in a disorderly manner while carrying a firearm.

Court documents say that the MP fired one round of ammunition with the intention to kill the DJ.