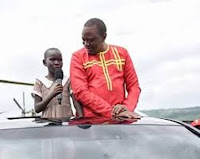 Tuesday January 28, 2020 - A Jubilee MP has found himself on the wrong side of the law over remarks he made during the burial of landslide victims in West Pokot on December 12th, 2019.

Kapenguria MP, Samuel Moroto, was interrogated by Kapenguria DCI detectives for the pronouncements he made regarding President Uhuru Kenyatta’s Government's efforts towards compensating and resettling landslide victims.

Moroto is alleged to have uttered abusive words towards President Uhuru Kenyatta over the role of the State in catering for the affected.
Addressing the media, West Pokot County Criminal Investigations Officer, Michael Mwenje, said that the Kapenguria MP's remarks were deemed offensive and thus sought clarification.

However, Moroto countered these allegations, arguing that his remarks were made while he was mourning.

"I do not regret my remarks.”

“Those were emotional remarks, and everyone has his or her own style of mourning," he argued.

“We were mourning and those were emotional remarks but it was true because up to now we have not recovered some bodies buried in the debris,” Moroto added.

Moroto has since been summoned to Kapenguria Police Station where he recorded a statement.