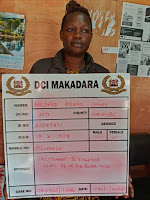 Saturday, January 25, 2020 - Popular activist, Mildred Atty Owiso, the woman who recorded a police officer refusing to leave her car and mobilized members of the public to eject him, has been arrested.

Police officers stormed her house on Saturday afternoon and arrested her like a 'most wanted criminal'.

The officers violently broke into her home, allegedly killed her dog and arrested her while she live-streamed the whole episode.

According to the video, Atty was in her underwear and towel when the police broke into her home.
One of the policemen in the video can be heard refusing to let her get dressed.

"You think Kenya is yours," he fumes, "Kenya is not yours".

Atty will be charged with incitement to violence according to Buru Buru Sub County Police Commander (SCPC), Adamson Bungei

She is currently being held at Makongeni Police Station where she will spend the weekend until Monday.

“She has been arrested in connection with incitement to violence."

"On Thursday, she recorded herself on video asking a uniformed police officer to leave her car on grounds that no law enforcement officer is allowed to enter a motorist’s car to make an arrest, which is not true,” said Bungei.

Section 96 of Kenya’s Penal Code criminalises incitement to violence, and a wrongdoer found guilty of the offense could be jailed for up to five years.

Watch the videos below.