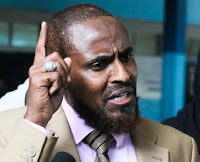 In a post on social media, Dida said that Deputy President William Ruto is not fit to be President because he will continue the poor legacy of the Jubilee Government.

Dida argued that there are many Kenyans who will opt to leave the nation in the event that Ruto rises to power when that time comes.

According to him, it is high time that the Jubilee regime came clean on the projects it has established since President Uhuru Kenyatta and Ruto retained office.
"Should Jubilee win 2022 elections under Mr. William Ruto, many Kenyans will leave the country.”

“Life will be unbearable.”

“Unfortunately, we are only 3 years away from finding out.”

“But, should we win, Kenyans in the diaspora will return to find a haven," he tweeted.

Dida's remarks come after President Kenyatta warned leaders against engaging in sideshows at the expense of development.

He also warned leaders against using the Building Bridges Initiative (BBI) for their political gain.

The BBI report has split the country into two with one faction supporting Ruto on the mode of implementation of the report while the other faction stands with Uhuru and ODM leader, Raila Odinga, who are advocating for a referendum.