Who will save us from these floating coffins in the name of ferries? Another body retrieved at Likoni Channel after ferry tragedy 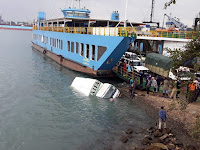 Wednesday December 4, 2019 - A body of a middle-aged man was found floating on the morning of Wednesday on the Indian Ocean near Likoni Ferry Channel.

Likoni Sub-county Police Commander, Jane Munywoki, confirmed that the body was recovered at around 11 am.

However, he noted that the identity of the body was not yet established and neither was it of the man who had earlier jumped off from one of the ferries.

"That was a recovery of a dead body and was found at the Indian waters.”

"The other man who had jumped into the waters, the one who had committed suicide, his body was retrieved sometimes later.”

“His body was identified by his kin," Munywoki clarified.

"Right now, it is an unknown person and we cannot identify the body unless people come to claim that it is their kin's," she continued.
On Sunday, a man mysteriously jumped off MV Harambee to his death in the Indian Ocean.
In a statement released by the Kenya Ferry Services (KFS) at the time, the unidentified male was believed to have elicited signs of a mentally unstable individual.

The body was later found on Tuesday.

"A body of an unidentified man suspected to be of the victim who went overboard MV Harambee on Sunday was this afternoon retrieved along shores of the Likoni Channel next to old ferry landing site.”

“The body was taken to Coast General Hospital Mortuary," Kenya Ferry Services made the announcement.