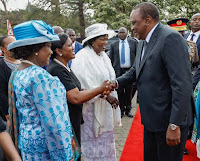 Tuesday December 24, 2019 - One of President Uhuru Kenyatta’s immediate cousins has discouraged calls for the introduction of a powerful Prime Minister position saying it a recipe for chaos.

But nominated MP, Beth Mugo, warnedon Monday that if created, the slot will only cause chaos, given that it will create two centres of power, the Premier and the President, resulting in unending clashes.
“Former President Mwai Kibaki and former Prime Minister Raila Odinga were constantly wrangling over critical policy issues and we don’t need that,” Mugo said.

Mugo, who is President Uhuru Kenyatta’s cousin, noted that she is also of the opinion that the suggestions of the BBI report should be passed through a popular initiative.

Mugo was among a host of other Senators who held a press briefing in Nairobi, demanding for changes in the constitution to strengthen the Senate.