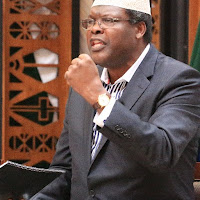 Tuesday December 31, 2019 - President Uhuru Kenyatta has given the green light for exiled lawyer, Miguna Miguna, to return to Kenya.

This is after he hinted that he may not oppose the return of Miguna after his dramatic deportation to Canada.

Speaking during the burial of Nairobi's first African Mayor, Charles Rubia, in Murang'a, Uhuru noted that Miguna will be allowed back to enjoy his constitutional-guaranteed freedoms including that of free speech.

"I hear there are even some who want to board an a plane to come back and speak...We have no problem with that because that is their freedom."

Miguna has already announced that he will return on January 7th after staying in exile for about two years.

This comes even as Government Spokesperson, Cyrus Oguna, indicated that Miguna’s return will be allowed provided he follows immigration rules.

“All his travel papers must be right and valid, then﻿ he will not be denied entry.”

“All his papers must be right and valid as per the travel regulations.”

“We are governed by the rule of law,” Oguna said.