UHURU is a political genius! See how he played RAILA with BBI and finished him completely – Baba never expected this and is still reeling from the BBI shock 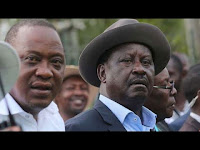 Speaking on Saturday in his constituency, the outspoken Jubilee legislator claimed that Mr Odinga wanted a pure parliamentary system but had failed to get it.

In the recommendations of the newly released report, the Prime Minister will not be a powerful one and will serve at the pleasure of the Head of State who will be the President.

"I want Raila to come out clearly and tell Kenyans that he has not been given what he wanted by the BBI and that he has been played (Sasa mimi nataka Raila aambie Wakenya kinaga ubaga ya kwamba ile BBI, ile yote ambaye alikuwa na matarajio yote amekosa na lazima akubali ya kwamba amepigwa chenga), " Duale said.

The Majority Leader admitted to being in favour of a parliamentary system but failing to get it as part of the BBI recommendations.

Raila Odinga, after the report's release, said that it could be made better and that it was not cast in stone.

"These proposals in the BBI report are not the end but are the beginning of a much needed national debate about the new Kenya.”

“Out of this, a solution will be found which is homegrown that will give birth to a Kenya that we all want and desire. This is history in the making,” said Raila.