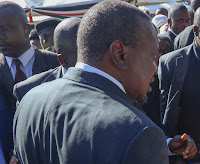 On Wednesday, the Son of Jomo who was speaking in Mangu, Thika, said leaders should not assume he is a fool because he is silent, and warned them against 'lecturing' Kenyans on the direction the report should take.

Reacting to these sentiments, Wainaina accused Uhuru of using the BBI in an attempt to extend his term in office.

In a tweet on Thursday, he asked the President, who is serving his second and final term, to complete his term and head to retirement.

"No, Uhuru Muigai Kenyatta.”
“You Can’t Change the Constitution while still in office using BBI report.”

“This is outright attempt to perpetuate your grip of political power either directly or through proxy.”

“You are angry because Kenyans have seen and exposed your intent. Finish, Go!" Wainaina stated.

According to sources, Uhuru and NASA leader, Raila Odinga, want the BBI implemented so that the former can be Prime Minister and the latter President with Executive powers in 2022.