0 Entertainment News, Gossip and Drama, Videos 07:33
A+ A-
Print Email 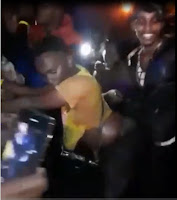 Monday, December 2, 2019 - Over the weekend, it was pomp and colour at Ngong Racecourse during the much hyped Nai-Fest Concert headlined by Nigerian singer Joe Boy - who disappointed fans after performing for less than 15 minutes

Young revelers, majority being college and University students, flocked the event despite heavy rains to have some nice time.

These two men who were part of the revelers who thronged to the concert caused a stir after they were spotted grinding on each other.

Netizens have reacted in shock after watching the crazy video that has been widely circulated on social media.
The two dudes who are suspected to be gay stimulated sex by grinding on each other's buttocks.