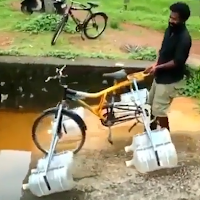 Friday, December 6, 2019 - This video of a creative guy showcasing his invention but failed spectacularly is going viral on social media.

The chap had come up with something that looks like a floating bicycle and wanted to show off his invention to the world.

However, things did not go as he had expected and he almost drowned.

While this is painfully hilarious, netizens reckon that he needs to make a few tweaks here and there and he will be good to go.

If you are not having the best of days, this hilarious video will put a smile on your face.