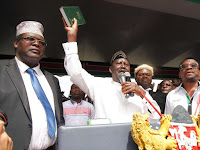 In his recently published book, Musalia Mudavadi: Soaring Above The Storms of Passion, Miguna detailed that Miguna's return into Raila's circle after the 2017 elections was responsible for the alliance's disharmony.

He added that shortly after the controversial lawyer showed up, Raila became secretive and largely operated as a lone ranger taking advice from Miguna.

He further revealed that they were shocked as NASA Principals when Raila formed the National Resistance Movement (NRM) and put Miguna in charge.

Miguna immediately started preparing for Raila’s swearing-in as the People’s President in complete contrast with the views of other NASA Principals.

“I must emphasise, NRM was not a creation of NASA, nor was it a NASA organ.”
“It was just as mysterious to me as was the manner in which it was first introduced to Kenyans.”

“So, too, was the sudden emergence of Miguna Miguna, the NRM General,” Mudavadi said.

He also noted that the fallout began on October 25, 2017, at a rally, a day before the repeat presidential elections.

It all started after Raila pulled out of the presidential race after losing in the first one which was nullified by the Supreme Court and claimed that he had a groundbreaking message which, as it turned out, did not exist.

“I did not know what this earth-shaking message was.”

“I established that none of the other three principals knew (it).”

“And so like the rest of the country, we waited for October 25, 2017," continued Mudavadi.

Mudavadi later learnt that the original deal was that the repeat election would be nullified since it was believed that only President Uhuru Kenyatta and Raila were eligible for the poll.

However, Raila's plan was disrupted after the high court, just a day later, ruled that all other presidential contenders were eligible for the repeat poll.

“It would be dishonest to say that this situation did not throw us off balance.”

“We may have put on brave faces in public but internally we knew things were not good at all,” he explained.

He further detailed that NRM took over NASA's operations leading to the controversial January 30, 2018, swearing-in.