STRESS REMOVER: This hilarious video will leave you in stitches and make your day (VIDEO) 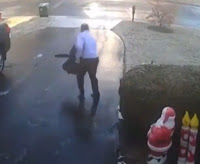 Friday, December 20, 2019 - If you are not having the best of days, this hilarious video will put a smile on your face.

They say laughter is a powerful stress reliever and this hilarious video is just what the doctor prescribed.

The poor guy tried to contain the situation but could not hold on.

The way he struggles to stay up only for him to land awkwardly in the end is just hilarious!
Watch the video below.
The Kenyan DAILY POST