Shock as man who was rushed to hospital after attempting kill himself, commits suicide in a hospital ward! 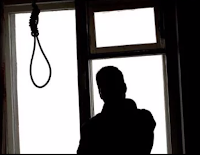 Tuesday, December 31, 2019 - A middle aged man committed suicide in one of the ward’s toilets a day after he was rushed to Murang’a County Referral Hospital after his attempt to kill himself by taking poison failed.

The hospital’s Medical Superintendent, Dr. Leonard Gikera, said the deceased, who hails from Kangema, woke up at around 5am and took a bed sheet with him to the toilet.

He said the body was found by fellow patients dangling from the shower head inside a washroom with the bed sheet tied on his neck.
Gikera said before the incident, the patient was recovering well from the effects of the poison he had earlier taken.

“For now we cannot be able to establish what pushed the patient to take his life. It’s like he was determined to kill himself since he had tried to take poison, an attempt that flopped,” Dr. Gikeria said.

Murang’a County Police Commander, Josephat Kinyua, confirmed the incident and expressed his concerns over rising suicide cases in the region.

“Cases of suicide of people aged below 40 years are on the rise and we advise young people to seek help and advice from members of clergy, community leaders and psychiatrists instead deciding to take their lives,” said Kinyua.

The police boss stated that they were trying to reach the family of the deceased as they proceed with investigations on what pushed the middle age man to take his life.