Shock as jilted police officer soaks two sisters in petrol and sets them on fire - He was dating one of the sisters! 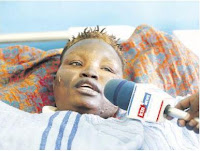 Monday, December 30, 2019 - A police officer is being held at Nakuru Police Station after he locked two sisters in a house, soaked them in petrol and set them on fire on Saturday night.

Phanice sustained 18% burn injuries while Ruth sustained 8% burns and are waiting to be examined by a reconstructive surgeon.

The police officer who committed the heinous act is said to have been threatening Phanice who was her lover before they parted ways some weeks ago.
The officer who has been identified as Saka Achimba, showed up at Phanice’s shop at 6:30 pm and asked about her whereabouts.

Phanice had gone to Nakuru town to pick some goods but Achimba left the premises with Phanice’s phone and threats to kill her.

He came back around 8pm to the shop, with petrol and locked the shop before soaking the two sisters in petrol and setting them ablaze.

"A probe was launched when the crime was reported at Bondeni Police Station.

“The officer is being interrogated," Analo stated.