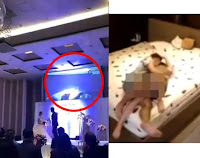 Tuesday, December 31, 2019 - This wedding aborted after the groom played a video of the bride having sex with his brother in front of shocked guests.

The groom knew the bride was cheating on him and decided to humiliate her on the day of their wedding.

In the viral video, the emcee is heard telling the crowd 'now we are going to show you the videos of how the newlyweds grew up'.

But seconds later, an X-rated video starts playing on the screen.
In the video, the bride is seen naked in bed with the groom's brother.

Then the groom yells at the bride on stage 'you thought I didn't know?' as the bride throws her bouquet at her partner before people ran to the stage to separate them.

The wedding was between a Chinese man and his partner and took place in the province of Fujian in south-eastern China over the weekend.