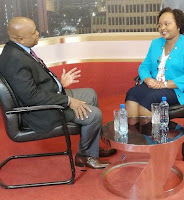 Friday December 20, 201 9 -KTN’s Point Blank host, Tony Gachoka, is among keyboard warriors who have been recruited by Kirinyaga Governor Anne Waiguru to defend her on social media.

Over the last one week, Waiguru has been on the receiving end over the National Youth Service looting where she is believed to have stolen more than Sh 5 billion while serving as Devolution Cabinet Minister.

On Friday morning, Waiguru recruited an army of online warriors to push the hash tag #WaiguruUnitesMtKenya.
The delinquents led by Gachoka tried to lie to Mt Kenya electorate that Waiguru, who is a patented looter of public money, is trying to unite Mt Kenya region.

Tony Gachoka is said to be broke and was allegedly paid some few coins by Waiguru to push the nefarious agenda.