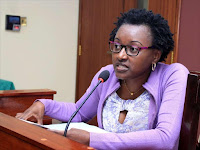 Pauline, who is on the Ethics and Anti-Corruption Commission (EACC) radar, for looting billions from the City’s coffers said that Nairobi County has cleared Sh4.2 billion of pending bills and wants the National Treasury to release more money to pay bills.

Pauline, currently acting as the Finance Executive, said the equitable share plays a critical role in planning what the County needs so that they know the amount to allocate to pending bills.

“The National Treasury should release the funds so that we can plan accordingly on how payments are done.”
“We followed the President's directive and paid some of the pending bills so it won't be fair if funds are not released," Pauline said in a letter to Treasury.

According to the Treasury, Nairobi tops the list of Counties with pending bills amounting to Sh8.2 billion, a figure Governor Mike Sonko disputed.

Nairobians have asked the Directorate of Criminal Investigations (DCI) to investigate Pauline Kahiga because she is among cartels who are looting millions of shillings in City Hall daily.

City residents also warned Treasury not to release money to Nairobi County until all accounts are verified by the Auditor General.