Monday December 9, 2019 - Deputy President William Ruto refuted claims from the media that there is division in the Jubilee party.

The Deputy President was responding to a publication by a local newspaper that indicated there is a rift among members of the ruling party.

In a post on Sunday evening, DP Ruto dismissed these allegations and cited that the Jubilee Party is not only strong but also united.

He further urged Kenyans to disregard claims from the media.

"Kenyans should ignore this divisive propaganda.”

“Jubilee under the able leadership of President Kenyatta is strong, focused and united," Ruto's statement read.

According to the publication, a section of Jubilee Party members support DP Ruto while the other has rallied behind President Uhuru Kenyatta.

The Publication highlighted a case where 97 MPs who support DP Ruto met in Naivasha to discuss the Building Bridges Initiative (BBI) report.

On Saturday, DP Ruto made a U-turn on the implementation of the BBI report and supported President Uhuru.

He advocated for the implementation of the report and dismissed reports that he was against it.

The BBI report has been the epicenter of politics in the country, especially on its implementation. 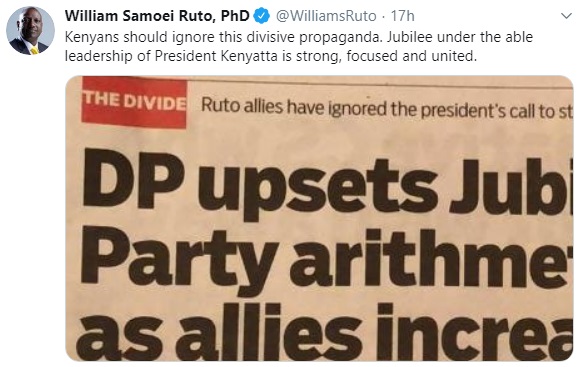