0 Forum and discussion, Gossip and Drama, Lifestyle, Videos 07:14
A+ A-
Print Email 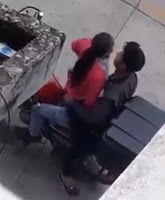 In the video going viral on social media, the hot-blooded couple is seen doing their thing on a delivery motorbike without a care in the world.

Their adventure ended in an ant-climax as they lost balance and tumbled to the ground.

Recently, a video of female Kenyan pastor advising her congregants to engage in sex anywhere went viral on social media.

In the video, the Pastor, who is also said to be a doctor, describes sex using the words ‘Twa Twa’ and thrusts her hips animatedly.

Granted, sex is up there among human needs, people should respect themselves and do it in private.
Watch the video below.
The Kenyan DAILY POST