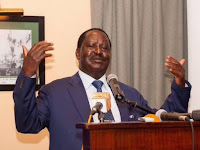 The Governor, who has a number of corruption cases, will be impeached over integrity issues and ODM MCAs are among MCAs who are planning to oppose his impeachment.

The 18 are said to have planned an 11-day trip to Dubai, United Arab Emirates (UAE) funded by the taxpayer to ensure that the Assembly did not have the quorum to pass a censure motion against Governor Sonko.
Reports from Orange House now indicate some of its members have been secretly meeting with those who have planned to travel to save Sonko should an impeachment motion be brought before the house.

The County Assembly requires at least 82 MCAs out of the 123 members of the House to pass a censure motion.

Taking 18 out of the House would affect the number of MCAs available to vote.

Raila through ODM Secretary General, Edwin Sifuna, said that the MCAs will face disciplinary action if they fail to support the impeachment motion.