1 Entertainment News, Gossip and Drama, Videos 05:23
A+ A-
Print Email 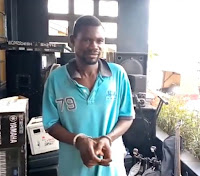 Thursday, December 5, 2019 - A self-proclaimed man of God identified as Pastor Matthew Osika, was arrested after stealing musical instruments from another church to start his own church.

The pastor was part of a gang that broke into another church and made away with the instruments.

Acting from a tip-off, police stormed the pastor’s house and found the stolen instruments.

However, the pastor defended himself saying that he bought the instruments from someone he refused to name to start his own church.