Nairobi Country in sex scandal as MIKE SONKO’s Secretary, SIMON LEBOO, is caught up in a love triangle 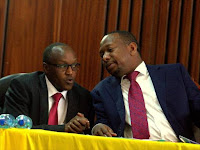 This is after a lady in her mid-thirties claimed that Leboo befriended her, exploited her sexually but has now dumped her only to engage her friend.

According to the lady, her efforts to reach out to Leboo have been unsuccessful and her calls have gone unanswered.

Armed with hard evidence, the lady showed her romantic WhatsApp message exchanges between Leboo and herself.
In one of the messages, Leboo suggests to meet her at a secret city hideout for a sex marathon.

The woman has pictures taken together with Leboo ne her mobile phone.

Leboo is now the Acting Governor for Nairobi County now that Mike Sonko, who was running the county with a deputy for almost two years, has been barred from accessing his office due to corruption.