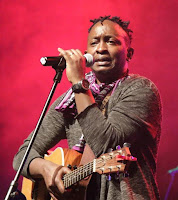 The 'Nchi ya Kitu Kidogo' singer accompanied his blunt lyrics with a piano melody as he urged the Jubilee administration to clean up jails in the country, warning that most of the actors in Government would eventually end up.

"Clean up the jails Jubilee because that's where you are going, make it good make it good because you are going home," sang Wainaina.
Wainaina turned his attention to Governor Sonko, who was arrested on Friday and arraigned in court on Monday over graft charges.

He urged the Governor to follow suit and clean up jails as he taunted him in his lyrics that he was destined to be there for a while due to the damning evidence that the DPP disclosed he had against him.