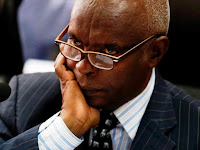 The Governor served papers to Nyakundi through an advert published in a local daily on Thursday. 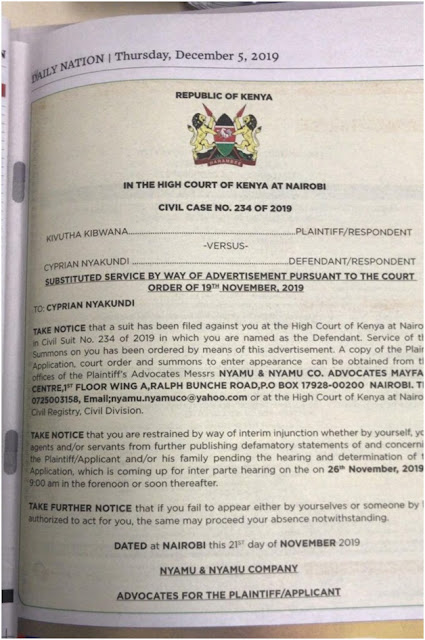 Makueni governor Kivutha Kibwana looks regal. His crown of white hair gives him a saintly aura you would associate with wisdom. His speeches are deep and thought provoking. On social media, he is a ‘hard working’ governor. He poses for pictures with elderly village women… He carries babies on his back, strapped by a lesso. He sits down on the ground and listens to wazee speak during chief’s barazas. Humble, polished, well educated and development conscious governor. Unfortunately, it ends there.

The man is a master of creating perceptions, he is a star in pretense and an avid user of slick public relations to fool everyone.

Recently, the good governor was in the coast and as usual, he got his trusted pimp to organise for a Kamba prostitute who will keep the governor’s hands full and his balls empty for a night.

His right hand man went and got a woman. They agreed on the rates. The girl was escorted to Kibwana’s room. The agreed prices was Ksh 20,000. Within fifteen minutes the girl started screaming in the room. Kibwana indeed, is Bwana Chuma. An aide of the governor quickly came to the room to help sort out the problem. The Kamba whore who was crying profusely narrated in Kamba language what she was going through. She had agreed on virginal sex butt Kibwana had lied to her. Set her up doggy style, went for a few strokes. He then put it in the wrong hole and pinned her down.

The girl painfully limped away, her bottom too sore to even put on the thong she came wearing. She carried it in her hands. Shocked aides watched as the governor stammered,

“No buts, I am leaving,” the girl said as she left.

Like any self made man, Kibwana starts from the bottom.

This story is well known within Kibwana’s inner circle. His love for anal sex  makes it difficult for his people to get him a woman because many girls fear being drilled upto their intestines.
Ask anyone close to Kibwana. The story has been told so many times and everyone in Makueni County Assembly knows how the governor leaves women limping, unable to seat and feeling hollow in their bottoms. Kibwana is the destroyer of behinds.
In a three part series, we will expose Kibwana for the fraud he is…the compromised media in this country has been killing all negative stories touching on Kibwana. Even when the auditor general questioned a Ksh 1.4 billion hole in Makueni County coffers, no media house published the story.
We will expose how he uses young Kamba girls to quench his insatiable thirst for sex.
We will expose his women and the ones he has sired babies with. We will, without fear, expose how his daughter Kwekwe Kivutha and her mzungu husband have been getting contracts from Makueni County Government.
We will expose how Kibwana’s wife earned millions of tax payers money through her NGO. The NGO only teaches youth how to use condoms.