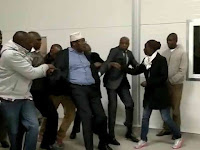 Tuesday December 31, 2019 - Lawyer Miguna Miguna has hit back at the Government after it issued a statement ahead of his return.

In a series of tweets on Monday, Miguna demanded that the Government should obey court orders to ensure his return.

"Court Orders are not suggestions.”

"Return/issue my valid Kenyan passport, which you took from me illegally and the Courts have ordered you to return unconditionally.”
“The Courts also ordered you to FACILITATE my return and ENTRY into Kenya UNCONDITIONALLY," he said in one of the tweets.

Miguna's tweets come after President Uhuru Kenyatta broke his silence about his return.

Speaking during the burial of former Nairobi Mayor, Charles Rubia, Uhuru said that Miguna has the freedom to return and speak whatever he wants but he must stick to the law.

“There is no one that has been barred from speaking.”

“You can walk on the roads and scream.”

“I have heard even others want to board flights back so that they can continue speaking,” he said.

Likewise, Government Spokesperson Cyrus Oguna had earlier on said that Miguna will only be allowed back into the country if he produces the required travel documents.