Mad woman beats up a pastor who tried to deliver her by force after spotting her walking almost naked in the steers! Ona vituko (VIDEO) 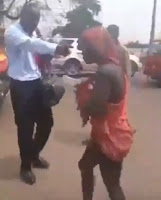 Friday, December 20, 2019 - A mad woman turned up against a pastor who tried to deliver her by force while he was preaching in the streets.

The energetic man of God who was preaching at the top of his voice followed the mad woman and tried to cast out demons by force but things turned south so fast.

The mentally challenged woman turned up against the pastor while he was busy chanting prayers and speaking in tongues and attacked him.

These pastors should just mind their business at times.
Watch video.
The Kenyan DAILY POST