Lipa pesa mzee! PROSTITUTE strips a man NAKED in public after he banged her goodies and refused to pay for SEX (VIDEO)

0 Entertainment News, Gossip and Drama, Videos 05:46
A+ A-
Print Email 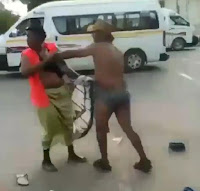 Monday, December 2, 2019 - The public was treated to free drama after a man was stripped naked by a prostitute in broad daylight and beaten like a stray dog.

A commercial sex worker confronted the sexually starved man who had sought her services after he refused to pay her the agreed amount.

She rained kicked and blows on the man and stripped him naked as the public watched.

She demanded to be given what belongs to her and instead of the stupid man paying her the dues, he decided to engage her in a fight.

The violent flesh peddler overpowered the man and taught him a lesson that he will never forget.
Watch video of the daylight drama.
The Kenyan DAILY POST