LADY gives her boyfriend a hot slap after he proposed to her in the lecture hall infront of fellow students, this is embarrassing! Poor boychild! (VIDEO) 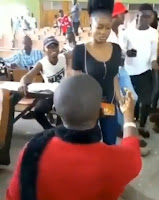 Tuesday, December 3, 2019 - This dude went down on his knees armed with a ring  ad proposed to his girlfriend in the lecture hall as fellow students watched but things turned south so fast.

Instead of the lady saying yes, she turned against her boyfriend and gave him a hot slap that he will never forget anytime soon.

The poor dude was left covered in shame after suffering the humiliation that may make him hate women for good.
Watch video.
The Kenyan DAILY POST