LADIES, these fake buttocks you are walking around with will soon explode - See this lady spotted in a night club (VIDEO)

0 Entertainment News, Gossip and Drama, Videos 06:15
A+ A-
Print Email 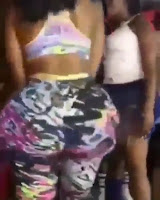 Monday, December 2, 2019 - Ladies these days are obsessed with big behinds, prompting them to enlarge their God given buttocks with dangerous chemicals which react at times and leave them with permanent scars.

They have seen what big fake booties have done to Vera Sidika and other socialites, and that is why they are rushing to get booty enlargement creams which are readily available for as low as Ksh 2,000.

This lady who was spotted in a night club dancing and flaunting her fake buttocks may soon regret why she interfered with her natural bam.

The fake booty which resembles an ant-hill is almost exploding.
See video.
The Kenyan DAILY POST