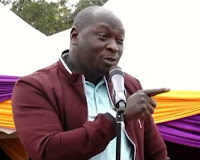 Friday December 6, 2019 - Cherangany MP, Joshua Kutuny, has predicted the man who will become the fifth President of Kenya in 2022.

President Uhuru Kenyatta, who is in his second and final term, is expected to go home in Gatundu after a dismal performance as Head of State.

In a viral video that surfaced online on Friday, Kutuny who was speaking in his Kalenjin language predicted that Deputy President William Ruto will be the next President of Kenya.

The youthful lawmaker who has been Ruto's fierce critic in the recent past said even though the current constitution will be changed to expand the Executive, the DP still stands high chances of clinching the Presidency compared to his competitors.

“If you ask me to predict who will be the next President, I can assure you Ruto will be President," Kutuny stated.