Is this the man that MIKE SONKO has picked to take over from him as he fights in court to clear his name? This is the joke of the year 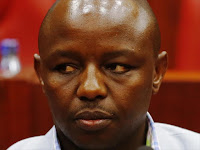 A letter making rounds on social media purportedly from embattled Sonko indicated that Mbugua had been picked to discharge duties as DG.

In the letter, which Mbugua has since dismissed as fake, Sonko purportedly asks the assembly to expedite Mbugua's appointment and to swear him in to take over from him as he fights to clear his name of corruption charges leveled against him.

But in a quick rejoinder on Monday, the East Africa Legislative Assembly MP dismissed these claims, adding that he's not interested in the job.
"Fake News......Am not and I have never been interested in becoming a Deputy Governor.”
“Am discharging my duties in EALA faithfully and in contentment," he said.

"Governor Sonko is a brother and a friend for so many years and I wish him well always," added Mbugua.

Sonko is currently embroiled in a tussle with EACC, something which saw him arrested on Friday.

He spent the entire weekend in police custody.