If UHURU supports Dr. WILLIAM RUTO in 2022, I will support him because I will stick with the Son of Jomo till the end - KALONZO MUSYOKA declares 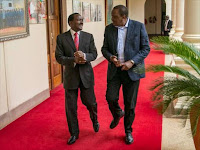 Tuesday December 24, 2019 - Wiper Democratic Movement party leader, Kalonzo Musyoka, has said that he will be in the political formation that President Uhuru Kenyatta will support in the lead-up to 2022 elections.

Addressing journalists at his Yatta Farm on Monday, Kalonzo said that he had made a personal decision to stick with Uhuru even after 2022.

“I have made a resolution that I and the Kamba community are not flip-flopping and where Uhuru will be even after 2022, we will be there,” Kalonzo said.
“We are now engaging everybody as a free gear."

"But our true direction is to support Uhuru."

"I have not spoken to Raila of late but I know his support for Uhuru till he finishes his term has not changed,” Kalonzo added.

Although, Uhuru is yet to declare who he will support for Presidency in 2022, sources say he may endorse National Super Alliance (NASA) leader, Raila Odinga, or his deputy, Dr William Ruto.