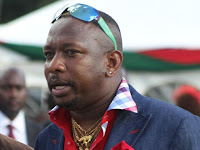 On Friday morning, the Director of Public Prosecutions (DPP), Noordin Haji, issued an arrest warrant against the Governor who he said has been frustrating investigators.

"I have ordered for the immediate arrest and arraignment of Sonko and other officials for the crimes of conflict of interest arising from having received money from the County of Nairobi while serving as Governor, unlawful acquisition of public property, money laundering and other economic crimes," Haji said.
Following Haji’s order, the Director of Criminal Investigations (DCI), George Kinoti, asked his boys to hunt for the Governor.

On Friday around noon, Flying Squad officers arrested the Governor in Voi while heading to Mombasa.

Sources said the Governor was going to Mombasa County to hide until Sunday and present himself before DCI on Monday.