Wednesday, December 4, 2019 - Detectives from the Directorate of Criminal Investigations (DCI) have arrested a man who has been conning unsuspecting Kenyans by posing as a cousin to Interior CS, Fred Matiang’i.

The man identified as Evans Ratemo was soliciting money from unsuspecting Kenyans and promising to secure jobs for the victims at the Kenya Prisons Service.

“Mr. Evans Koroso Ratemo who has been personating a cousin of a Cabinet Secretary was yesterday arrested 4 defrauding members of the public over Ksh. 600K purporting to employ young men into @PrisonsKe.

The suspect, a resident of Dagoretti Corner, Nairobi, will be arraigned today to face charges of obtaining money by false pretences.
Meanwhile, the Government has issued a stern warning Kenyans desperate to join KDF in the ongoing recruitment against paying rogue officers promising to influence the recruitment.

“If you accept to be conned, you will lose your money and still go to jail, no one can influence the recruitment process,” a circular from KDF read.

The memo also warned that anyone who will issue fake certificates during the exercise will face the law.

The recruitment kicked off on November 27th and will run till December 16th, 2019. 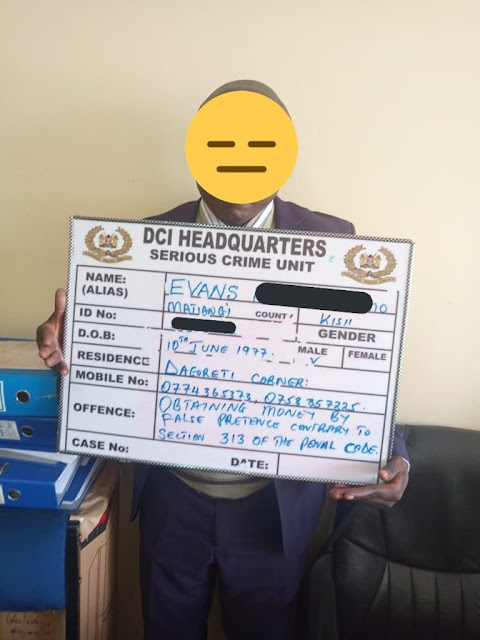