Continue clinging on the lorry or hit the tarmac! Man’s trouser falls off while clinging on a lorry on his way to work in Nairobi (VIDEO) 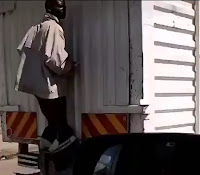 Monday, December 2, 2019 - This poor man was left with little to no option after his trouser fell off while clinging onto a lorry on his way to work.

He clinged on this lorry to save fare as tough economic times force Kenyans to come up with extreme measures to survive in the city.

Even after his trouser fell off, he continued clinging on the lorry to avoid hitting the tarmac.
Watch video.
The Kenyan DAILY POST