Before we call on lifestyle audit on DR WILLIAM RUTO, let UHURU and RAILA ODINGA be subjected to audit – KOIGI WAMWERE says 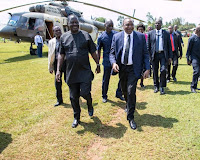 Last month, President Uhuru vowed to lead the way in taking a lifestyle audit, which he said would be used to weed out corrupt state officers, which, however, never kicked off.

Wamwere now says the two, who have been claiming to be leading the war against corruption in the country, should take the audit, given that they are among the richest Kenyans.