The US Government is targeting small fish, go for big fish like UHURU’s family members and RUTO - AHMEDNASIR ABDULLAHI 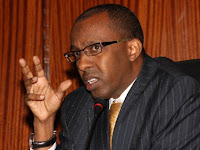 Tuesday November 19, 2019 - Renowned city lawyer, Ahmednasir Abdullahi, has poured cold water on the decision by the US Government to issue a travel ban against former Attorney General Amos Wako.

On Monday, Wako, alongside his wife and son, were banned from setting foot in the US over allegations of engaging in graft.

Wako's ban came hours after US Secretary of State, Mike Pompeo, said that the US is not ready to allow corrupt individuals to conduct businesses on its soil.
Pombeo also said that the US is fully behind President Uhuru Kenyatta's fight to clean the Government.

“Economic prosperity for all Kenyans is only possible by defeating the scourge of corruption, which also requires a functional, fair, and transparent criminal justice system,” Pompeo said.

But reacting to Wako’s ban, Ahmednasir said that the US should target big fish instead of small fish like Wako.

“By targeting former AG Amos Wako, America is obviously going for a low hanging fruit..and the sacred cows in KENYA are still sacred because of REALPOLITIK...UNCLE SAM has always been a very smart dude," Ahmednasir wrote.